We are not alone in this universe. This simple sentence has been a credo, passed down through the ages by astronomers and stargazers alike. A 2017 study revealed that nearly half of Earthlings believe there is life on other planets and want to make contact with alien lifeforms. And now scientists believe that alien life could exist on 90 percent of earth-sized planets.

Astronomers say around 17 billion earth-sized planets inhabit the Milky Way galaxy. Since an estimated 17 percent of stars in our galaxy harbor exoplanets like earth in close orbit, and because there are 100 billion or so stars in the Milky Way, that amounts to a minimum of 17 billion small, rocky alien worlds.

This equates to an Earth-size planet around one in every six stars. “Exoplanet” is a term used for a planet that orbits a star outside the solar system. Francois Fressin, of the Harvard-Smithsonian Center for Astrophysics, said it’s likely there are many more such planets orbiting at greater distances from their stars. Some of these planets have been described as “alien Earths,” capable of supporting life as we know it.

Fressin headed up a team of astronomers to research “look-alike” earth-type planets by analyzing data collected by the Kepler Space Telescope. Kepler detects slight decreases in brightness caused when planets cross the face of — or transit — their parent stars. From these blips in brightness, called light curves, scientists can calculate a planet’s size and orbit.

Since its launch in the spring of 2009, the telescope has noted more than 2,700 potential planets. “There is a list of astrophysical configurations that can mimic planet signals, but altogether they can only account for one-tenth of the huge number of Kepler candidates,” Fressin said in an official statement. “All the other signals are bonafide planets.”

Kepler Has Retired, But the Information Continues to Yield Answers

NatGeo reported that even though Kepler has completed its data collection, scientists are still discovering treasures in its vaults. Many previously overlooked planets are similar to Earth in size, and one of them is in an orbit that could be life-friendly. Caltech’s Jessie Christiansen said of Kepler’s results it was “inevitable that improved searches of the data would uncover previously undetected small planets.”

When an on-board malfunction crippled the first Kepler mission out in space, it was rebirthed as the K2 mission until this spacecraft ran out of fuel in late 2018.

Caltech scientists say over the three years of the K2 mission, 287,309 stars have been observed, and tens of thousands become known every few months.

Scientists Bring Citizens Onboard the Search

The Exoplanet Explorers citizen scientist project, developed by University of California Santa Cruz astronomer Ian Crossfield and Caltech staff scientist Jessie Christiansen, has created an online platform on Zooniverse for crowdsourcing research. (Zooniverse is a citizen science web portal owned and operated by the Citizen Science Alliance. It is home to some of the internet’s largest, most popular and most successful citizen science projects.)

Christianson explained that people anywhere can log on and learn what signals from exoplanets look like. Then they can look through data collected from the Kepler telescope to vote on whether or not to classify a given signal as a transit, or just noise. When a minimum of 10 people study a potential transit signal, and each receives a minimum of 90 percent of ‘yes’ votes, then they can be considered for further characterization.

In early April, just two weeks after the initial prototype of Exoplanet Explorers was set up on Zooniverse, the ABC Australia television series “Stargazing Live” featured it in a three-day event. In the first 48 hours after the project was introduced, Exoplanet Explorers received more than 2 million classifications from more than 10,000 users. Included in that search was a new dataset from the K2 mission—the reincarnation of the primary Kepler mission that ended in 2015.

At the conclusion of Kepler’s mission, scientists announced its official haul: The primary Kepler mission yielded 2,300 confirmed planets and 2,400 more candidates. The K2 mission added about 500 planets and candidates. 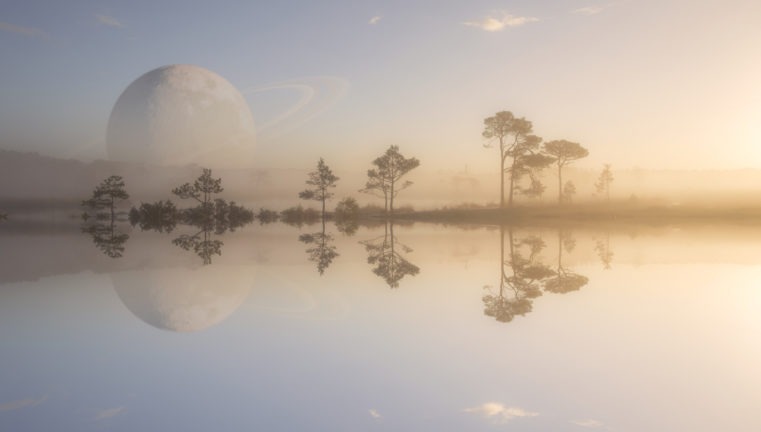 Dawn on an alien planet.

Starting With the Basic Building Blocks of Life

Science has long been aware of the basic chemical building blocks of life, and this is where MIT astronomer Sara Seager has put her attention. She created a roster of possible chemical combinations that could signal the presence of alien life. Seager and her colleagues have thus far invested a couple of years working on computer-generated mixtures of the six main elements associated with life on Earth: carbon, nitrogen, oxygen, phosphorus, sulfur, and hydrogen. But they were combinations unseen on our planet. She theorized it would be a good idea to consider all potential molecules that could be in gas form. “I just combine them in any way possible, like just taking letters in the alphabet and combining them in all ways.”

While it remains a puzzle to hit on just the right chemical soup, and discover biologically useful recipes, Seager’s approach may prove to be the way to uncover a trail of alien beings.

More Information Is on Its Way Across the Stars

Perhaps K2’s cache of nearer, brighter stars will yield an Earth-sized planet in its star’s habitable zone, close enough for follow-ups by other instruments to reveal oceans, blue skies, and continents.

And then there’s James Webb, a large, space-based observatory, optimized for infrared wavelengths, which will complement and extend the discoveries of the Hubble telescope as it launches in 2021. James Webb is designed in part to investigate gas giants and super-Earths and might find an outsized version of our planet. The observatory could zero in on a distant planet’s reflected light to detect the signatures of oxygen, water vapor, or some other powerful indication of possible life.

Discovering another blue-white marble hidden in the starfield, like a sand grain on the beach, will probably require an even larger imaging telescope. Designs are already underway for that next-generation planet finder, to be launched into space in the 2030s or 2040s.

Earth As a Testing Ground for Alien Discoveries

Scientists like Britney Schmidt, Georgia Institute of Technology, are testing the limits of underwater robots, swimming beneath Antarctic ice shelves as a dry run for the pursuit of alien life in outer space. Schmidt and her colleagues are testing Icefin, a drone built to explore the extreme ecosystems thriving beneath thick ice. The waters beneath our planet’s ice sheet are turning up species few people have ever laid eyes on.

But they are not the final target of this chase because the technology is bound for the icy waters of Jupiter’s moon, Europa, possibly as soon as 2030. “Icefin is capable of deploying through small drill holes in the ice, similar to what will one day be needed to explore Europa,” Schmidt says. “In the meantime, this project is looking to understand how ice-ocean interactions operate in Antarctica, and how these processes may couple to biological communities.”

The main factor that tipped the scales for scientists to declare their belief in life on other planets is modern technology. As space-bound telescopes and computers continue to evolve, more and more information can be gleaned by dredging the universe for signs of look-alike planets — planets that, like earth, have a certain special brightness about them. Perhaps the next step will be to find a way to confirm what many say they already know — that the earth itself has been visited by beings from other planets for thousands of years.