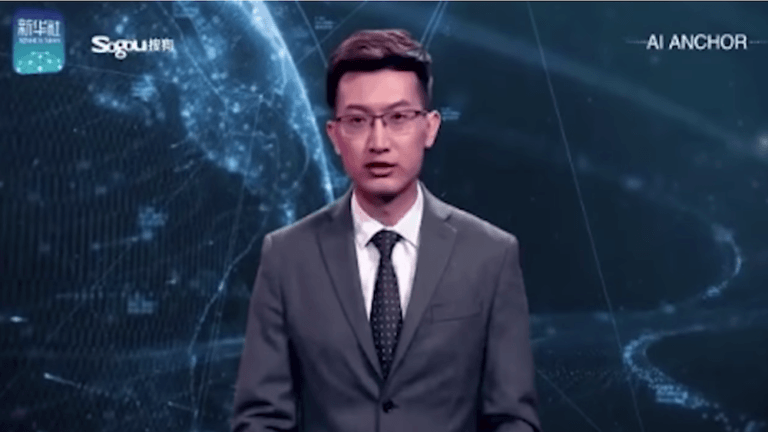 Chinese state-run news agency, Xinhua, broadcast its first A.I. news anchor modeled after one of its prime-time anchors, Zhang Zhao. The AI anchor was fashioned as the agency’s English-speaking host and promises it will report the news tirelessly, year-round, and without claiming overtime pay. Ha, ha, that’s a good one – apparently our future A.I. overlords have a sense of humor too.

The A.I. news anchor seems to employ similar technology to Apple’s Animoji, which mimics facial expressions, or it may be similar to a CGI character from your favorite superhero movie that looks uncannily realistic. According to one of its creators, Wang Xiaochuan, the technology could one day be used to have a digital mockup of anyone read the news to you, including your own parents.

But the concern with this technology for use in news media has stoked fears that it could be used to spread fake news and propaganda in a world rife with such issues. Videos implementing the technology to depict world leaders and celebrities giving completely fabricated speeches have circulated the internet recently, though it’s unclear whether these videos have been used to truly deceive anyone yet.

“Not only can I accompany you 24 hours a day, 365 days a year. I can be endlessly copied and present at different scenes to bring you the news,” the A.I. bot claims in the video.

In a world where traditional news media business models are failing due to new forms of consumption and widespread public distrust, this new technology promises to cut costs for publishers who no longer have to pay an actual human, while their bot can run non-stop as long as it has a script.

“The development of the media industry calls for continuous innovation and deep integration with the international advanced technologies … I look forward to bringing you brand new news experiences,” the bot said.

The pioneering of this technology by China is unsurprising as the autocratic country’s news reporting is entirely state-run. The country has taken other similarly Orwellian steps in its technological development, including a social credit score that rates its citizens’ daily behavior. The country has also installed a nearly universal surveillance apparatus that includes millions of CCTV cameras monitoring its citizens with machine-learning AI facial recognition technology.

The fears behind A.I. development stem from the idea that machine learning algorithms could one day lead to sentience and by the time this happens, A.I. will increase at an exponential rate, eventually realizing it doesn’t need humans or that it could enslave us due to a massive discrepancy in intellectual capacity. Others say this fear is absurd as we’ll always be able to unplug it – it’s just a computer after all. Right?

For more on the rise of artificial intelligence and the potential threats it poses, watch this episode of Deep Space :