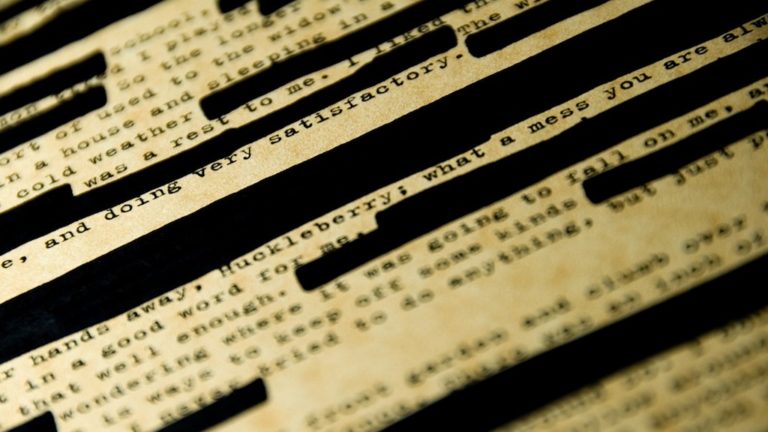 A WikiLeaks cable from 2010 details an interaction between a U.S. ambassador and the mayor of Dushanbe, Tajikstan, in which the mayor mentions knowledge of the existence of life on other planets.

The statement came from Mahmadsaid Ubaidulloev, then-mayor of the nation’s capital and former chairman of the country’s upper chamber of parliament. The two discussed Tajikstan’s upcoming election, the mayor’s desire to get Tajik students into Harvard, and issues with electricity at a Dushanbe cybercafé.

But a somewhat out of context statement came when the mayor began speaking about the conflict in Afghanistan. The cable states that he thanked the U.S. ambassador for his country’s contributions and sacrifices and said U.S. activity there was important “as we enter the third millennium and the 21st century.

He continued, stating that “war is very dangerous,” and “we know there is life on other planets, but we must make peace here first.” 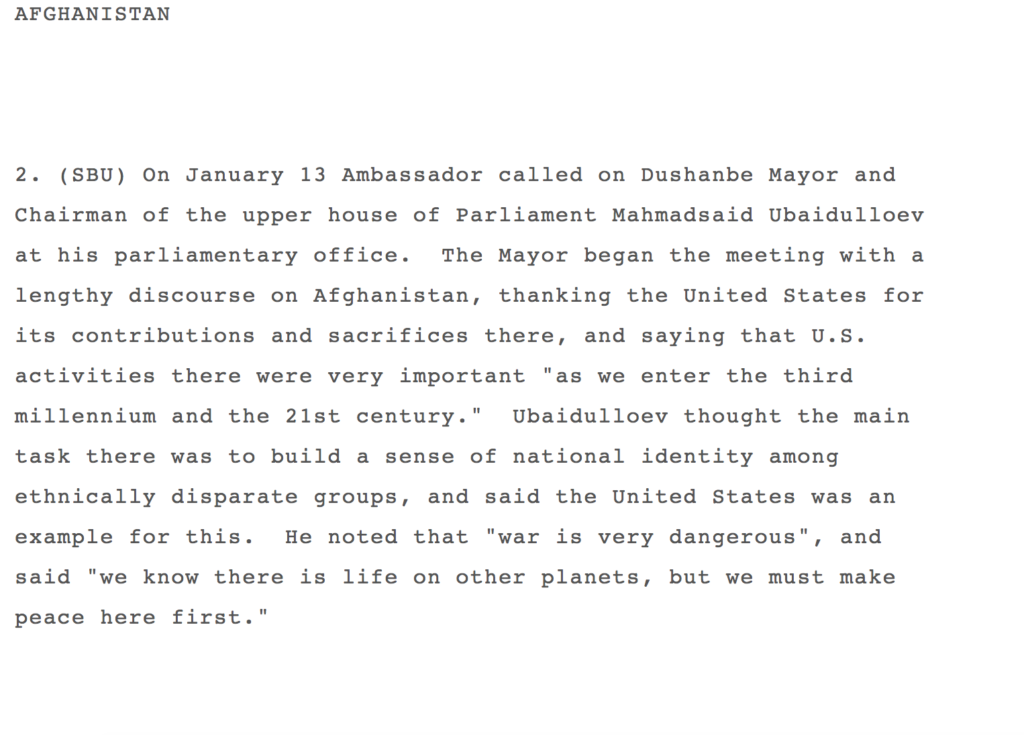 The cable doesn’t go into further detail as to the meaning of the mayor’s statement, despite its inclusion in a classified document. The ambassador makes subtle, dismissive notes throughout the cable painting an image of the mayor as somewhat aloof and irrational.

The ambassador describes the conversation as “platitude-ridden” and “nonsensical” saying the Mayor often lied about free and fair elections, and unbiased media coverage. The cable ends with the ambassador bluntly referring to the meeting as, “a right painful 90 minutes.”

But the mayor’s comment about extraterrestrial life is not the first to be made by a foreign dignitary to a U.S. ambassador. In a 2006 cable released by Wikileaks, Lithuania’s advisor to the Prime Minister, Albinas Januska, was quoted warning of the existence of, “a group of people, who are directed from the East, a group of UFOs, who are making influence from the Cosmos.”

Januskas said, “There also exists a decreasing number of persons, who are trying to rationally analyze the situation and to objectively evaluate what is happening.”

Again, the cable doesn’t go into further detail regarding Januska’s comments, though its inclusion in the cable signifies some potential interest or intrigue behind his statements.

With recent pieces of UFO evidence gaining more traction in mainstream media and the public’s general awareness, could we be on the brink of a wide-scale disclosure?

NASA’s Curiosity rover recently stumbled upon an unusually shiny object in Mars’ Gale Crater. While the discovery received some coverage, it came at a time when most attention was focused on the space agency’s successful touchdown of the InSight Lander. NASA says it believes the object may be a meteorite and that it plans to study it more closely, though Curiosity was unable to pick it up on its first attempt.

The object, which NASA named Little Colonsay after an island in Scotland, has a distinct sheen to it, even noticeable through a black and white image the agency posted on its website.

“The planning team thinks it might be a meteorite because it is so shiny,” Susanne Schwenzer, a member of the Curiosity team, wrote. “But looks can deceive, and proof will only come from the chemistry.”

Curiosity has discovered meteorites in the past, though every irregular or eye-catching find sparks excitement, especially considering the recent discovery of a 12-mile wide body of water beneath the planet’s surface — a breakthrough confirming that Mars, at some point in its past, contained vast oceans and potentially harbored life. This possibility excites those who believe we may find evidence of a lost civilization or even fossils beneath the planet’s dusty surface.

The latest discovery apparently occurred the same day the InSight Lander touched down, as NASA’s JPL website said Curiosity was greeted by the Mr. Rogers’ jingle “Please would you be my neighbor,” before it got to work studying Little Colonsay.

This is not the first time Curiosity has come across anomalous looking objects, as it once found a piece of plastic, which was later alleged to have originated as debris from its landing.

Other strange looking objects the rover uncovered have convinced people that NASA found animals or artificial remnants it then covered up or ignored. However, the space agency insists these to be the product of pareidolia – a trick our minds play on us to make objects appear recognizable – though still, some remain skeptical.

Back in August, a very distinctly shaped object was discovered by Curiosity igniting speculation of an alien artifact or that it was a piece of the rover which was starting to fall apart. NASA tried to quell the excitement saying it tested the object and found it was a rock.

In other instances, online sleuths have claimed that the rover imaged animals including a squirrel and a duck on the Martian surface. These claims however, should probably be taken with a grain of salt, but if you’re interested you can find them here and here.

Even if most of Curiosity’s discoveries are just rocks, there are in fact, some truly unexplained anomalies discovered while observing the red planet – check them out in this episode of Deep Space :